Syed Rasul Shah Khaki got three names – one by his grandfather, the other by his father and the last by his mother. His grandfather named him Ghulam Rasul and his father named him Rasul Shah while his mother named him Munawar Shah. He was born on the 9th of Ramdan, Monday, at ‘Zohar’ prayers at a place called Bolaam in Sirinagar (Indian held Kashmir). As it was the sacred month of Ramdan and being an inborn saint of Allah Almight, it is reported, that he did not accept mother feed till the appearance of ‘Shawal’ moon. It was the first sign of his being a true adorer of Allah Almight. Later, we find a series of consecutive spiritual incidents, almost transcendental, related to him that show that he was one of the favourits of Allah Almighty. He is a descendent of both Hazrat Imam Hussan (R.A) and Hazrat Imam Hussain (R.A). By birth he belongs to the line of Shah Muhammad Ghoas Lahori, Syed Abdul Wahab Gillani (R.A) and Syed Abdul Qadir Jillani (R.A). He had his spirittual oath at the hands of Syed Abdul Qadir Gillani (R.A). He used to room deeply absorbed in his spiritual ecstacy in the vallies of Kashmir during his adolesence. Once, there, he met with Peer Shareef-u-din Rafeeqi, the Khaleefa of Peer Maher Ali Shah (R.A). Afterwards, before the partition of Indo-Pak sub-continent, he set out on foot through Bara Mula to the hills of Murree. There, he paid his respects of to Khawaja Qasim Moharrwi (R.A). After spending some time in his service he went to Rawalpindi. He stayed there for some time on Kahsmir Road. Then he intended to pay his respects at the shrine of Peer Maher Ali Shah (R.A). During his visit there he spiritually got confirmation about all those predictions of Peer Maher Ali Shah (R.A) that he made to Peer Sahib earlier in one of his spiritual visits. Later he went to Amritsar. It was a time when he was leading a life of “Majzoobiyat”. Then he went to Lahore. There he paid his respects to the Shrines of Hazrat Data Gunj Bakhsh and Shah Muhammad Ghaus Lahori. Afterwards he went to Dhodha and from Dhodha to a small village of Chakwal named Mureed. 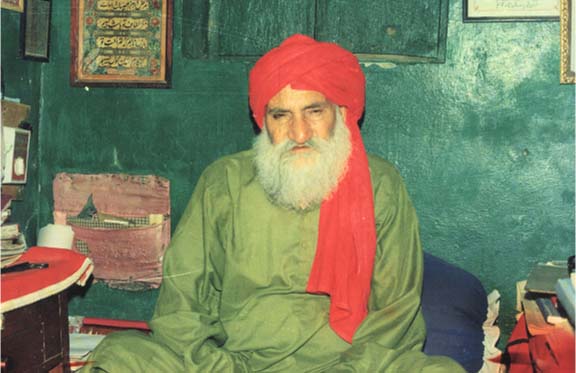